Looking for inspiration on foods beginning with R?

You’ve come to the right place, from radish to romaine lettuce and from ratatouille to risotto, we’ve got you covered!

Our extensive list of delicious foods will certainly make give your taste buds a workout!

Once you start looking for foods beginning with R, you’ll see them everywhere!

Originating from Italy, this is a radish with a spicy flavor.

A radish is a vegetable that is grown in the ground. It’s the root that you eat, it’s a light red color usually, but you can see them in rainbow colors also.

They are crunchy and have a slightly peppery taste. They are usually delicious eaten fresh and raw but you can cook them.

They also have health benefits, so Radishes are one of the more useful foods that start with R.

Depending on where you live in the world, a raisin (a dried grape) could mean different things.

Let’s talk about the international understanding of a raisin (in the US a raisin is both a raisin and a sultana, whereas internationally they are separate).

Raisins are a grape that has been dried, as they have dried they take on a dark brown color.

A raita is a delicious Indian side dish.

It’s made with yogurt and different spices, along with beetroot and chopped cucumbers.

Made in just 5 minutes, this is one of our favorite quick foods that start with R.

Ramen is a Japanese dish, it’s a noodle soup dish that is sold all over Japan as fast food.

One of many foods that start with R, this Japanese dish is made with a selection of vegetables or meats, and a popular way to top it is with a boiled egg.

Also known as broccoli rabe, it’s got a bitter taste and you can eat the stems, buds, and leaves from the cruciferous vegetable, it’s usually known for its use in Mediterranean cuisine.

The most common rarebit is called Welsh rarebit.

A tasty cheese dish, it’s an easy food that starts with r, is a simple, but delicious snack. Melted hard cheese over toasted bread.

Soft, juicy, with a sweet flavor these berries are not actually berries but small drupes that contain a single seed in each.

Raspberries taste lovely and we use them in our cocktails like the delicious raspberry mojito and raspberry daiquiri.

If you’ve never heard of ratafee before, then don’t worry, it’s an unusual food beginning with R.

It’s a sweet liquor and it is made from brandy and wine and is flavored with either apricot kernels, peaches, plums, and bitter almonds.

Ratatouille is a French stew. It is full of flavor and has an assortment of delicious vegetables in it such as zucchini, eggplant, tomatoes, and peppers. Take a look at our tasty ratatouille recipe.

Ravioli is pasta, it’s two pieces of flat pasta that have a filling between and then they are pinched together before cooking so that the filling stays inside.

They are usually square-shaped with savory fillings, but you can find some that are semi-circles.

Beets is short for beetroot. As the name suggests, beetroot is a root vegetable and is mainly eaten cooked by it can also be eaten raw.

Beautifully sweet, these red peppers are great for cooking with, and did you know that they are simply green peppers that have been ripened?

Red cabbage is a type of cabbage plant.

You’ll soon see why it’s called a red cabbage as has reddish-purple leaves. It can be cooked or eaten raw, we use it raw in our red cabbage slaw recipe.

It may surprise you to learn that the redcurrant actually belongs to the gooseberry family. The fruit is small, bright red in color, and is a tart flavor.

Red kitten spinach is a variety of spinach which is a leafy plant with maroon stems, you can eat this raw or cook it as part of aloo, salad, or soup.

Even though they are called red onions, they are more purple than red.

You can eat them raw or they can be cooked.

Red shallots are part of the onion family, they are small and have a more subtle flavor.

A traditional Reuben sandwich is made with rye bread, swiss cheese, such as gruyere or emmental, corned beef, and has a Russian dressing.

To make it vegetarian, we’d use vegetarian meat and veggie-friendly cheese.

One of the most well-known foods beginning with R, relish is a spicy or savory condiment that is added to a dish.

Retsina is a Greek wine, usually white but can be rose.

It takes its flavor from pine resin which was used to keep the air out of the barrels before impermeable bottles were invented.

A rhubarb grows in the ground and it has a strong sour taste, it’s popular cooked in a crumble dish.

A Ribier is a deep reddish-purple grape that comes from California.

We couldn’t leave a staple food out of this list!

Rice is grown in paddy fields and when it’s cooked, it becomes soft.

It’s an ideal staple because it doesn’t have a strong flavor, so can be paired with many different dishes.

It’s baked in the oven and should be eaten hot.

This is one of those foods that start with R that’s probably an acquired taste, due to rice pudding being a popular school dinner option!

A rickey is a cocktail drink that is usually served in a highball glass. It’s made with bourbon or gin and then has sweetened lime juice added along with club soda.

Ricotta cheese is usually made from cow’s milk and is a light fluffy cheese.

Rigatoni is a type of Italian pasta and is popular to use in baked pasta dishes.

It looks similar to penne but it’s often slightly curved.

One of our favorite foods that start with R, risotto is an Italian rice dish.

Risotto is made from rice called Arborio which is starchy short-grained rice.

Being vegetarian, we’d avoid this one and you might too!

Yep, you heard right – so make sure you know what you’re ordering!

This delicious lettuce is native to the Middle East and the Mediterranean, it’s got a mild flavor and is very crunchy when eaten freshly picked.

Yep, you guessed it, this edible shrub is a rose. Many roses are edible you may want to try the white beach rose or damask roses.

Rosemary is a shrub, its Latin name is Salvia Rosmarinus but is commonly referred to as rosemary.

It’s used as a fragrant herb and has blue flowers, it’s great to cook with, throw it on french fries, roasted vegetables, and pasta.

With a high starch content, the russet potato has thick skin and is a great choice for mashing and baking.

Rye is a grain that is a part of the wheat family. Rye is used for whisky and some vodkas.

It’s also used for flour, beer, and bread, rye bread can be found in most grocery stores.

So there we have it, we’ve talked about many foods beginning with R, can you think of any more? 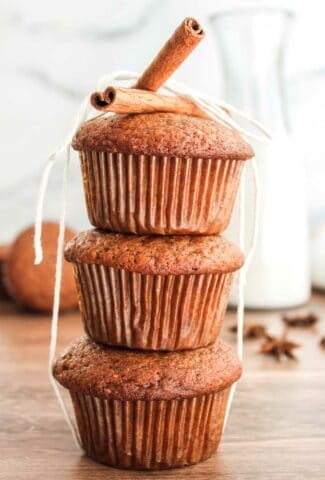 Pumpkin spice muffins are the perfect way to celebrate fall. They’re packed with all the flavors of the season, including pumpkin, cinnamon, nutmeg, and cloves.… 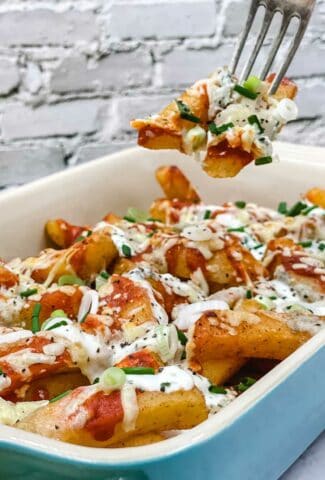 Are you looking for a delicious and healthy alternative to chicken wings? Look no further than our Vegetarian Buffalo Fries! Our fries are coated in…

About Mandy from Splash of Taste

A vegetarian for over 35 years, Mandy has taught herself to be creative in the kitchen. Traveling extensively, Mandy loves learning and adapting vegetarian recipes from across the world.

We are Mandy and Jane,
We love sharing our vegetarian food and drink recipes with you.
If you're cutting down on meat, going vegetarian or vegan, there's something delicious to eat and drink for you here
Read More… 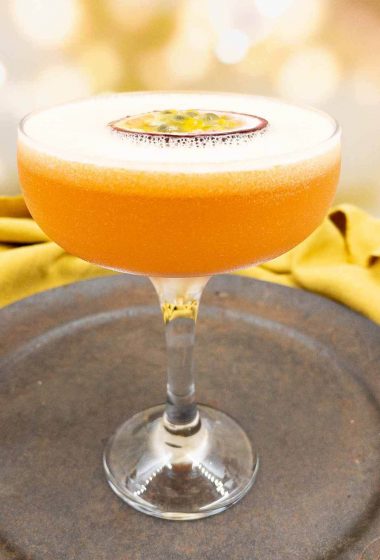 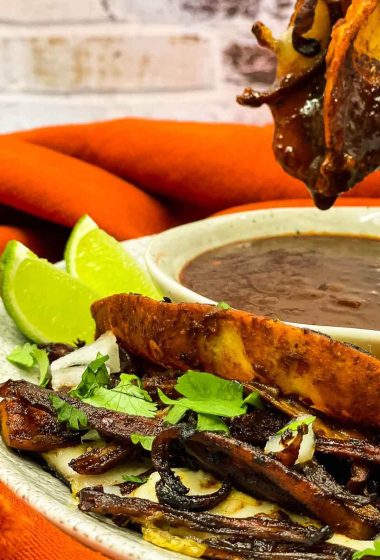 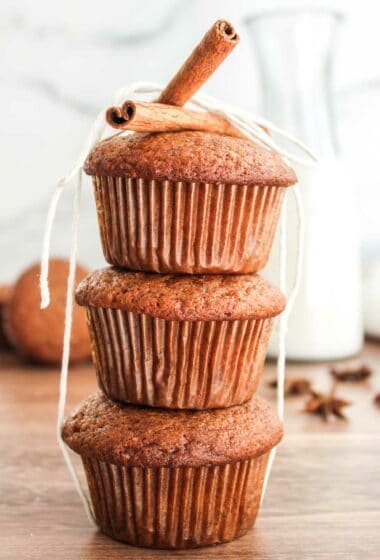 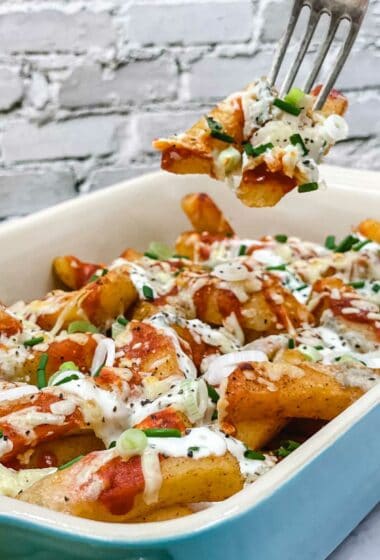